Updated July 2:  The 3 months of rolling strikes are finally over, but the train unions are making one last stand, and doing another 2-day strike July 6-7.

The train union is flexing its muscle, and will be screwing up everyone’s travel with rolling strikes all through April, May and June.   Two days of train strikes, then 3 days no strike, then 2 days of strikes again, and so on…

On strike days, there will still be a quarter of the trains running; click here for the day’s train schedule from Nice, plus the private Italian Thello trains should be running as well, 5 a day to all the main stops in both directions.  And click here for a whole page of my strike strategies and work-arounds. 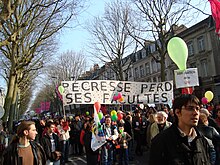 This train strike is due to the projected privatization of the French train system, which is famously inefficient, late, and beset with surprise cancellations.   The train workers’ union has amassed enormous power by threatening paralyzing transport strikes (often targeting peak travel weeks like spring break), resulting in an amazing array of perks for coddled train workers and their families …far beyond those of any other workers in France.  Hence those privileged few will do anything to hold on to their awesome perks, including screwing up everyone else’s travel as much and as often as possible.  Sympa!

This entry was posted in Planes, Trains, and Automobiles and tagged French Transport Strikes, Train Strikes. Bookmark the permalink.