April Fool’s Day is Poisson d’Avril in France, or ‘April Fish Day’, and the first prank that every French child learns is taping a paper fish (la poisson) on the back of an unsuspecting host.   As we get older the pranks become a little more subtle, and my favorite is the Nice Noon Cannon. 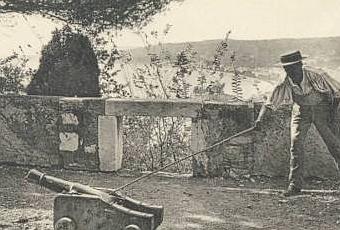 The Nice cannon has been making tourists jump and pigeons soar with its noon blast for over 150 years.   It started in 1860, when very punctual Scotsman Sir Thomas Coventry and his easily-distracted wife were living in Nice. Having become increasing frustrated by his wife’s tardiness in presenting the noonday meal, he approached the Mayor to propose a daily noon cannon shot just like back home in his Scottish village, and offered to foot the bill.   Some years later, Sir Coventry returned to Scotland, taking his little cannon back with him, but by that time the locals were so used to their midday marker that they petitioned the city to continue the tradition, and it continues today.

The miniature cannon has been replaced by a jumbo-sized firecracker, which for the past 20 years has been fired from the Chateau at exactly 12 noon by pyrotechnic expert Philippe Arnello. In two decades, 7 days a week, rain or shine, he has only missed twice, both times due to being stuck in the notorious Nice traffic.

…Except for April Fool’s Day, when every single year Philippe shoots it off at the wrong time, just to mess with everybody.  Sometimes it goes off at 11am, sometimes 1pm, but either way it’s guaranteed to cause a mild panic amongst the locals… until they realize that it’s a special April Fool’s prank, Niçois-style.

And on April Fool’s day, be sure to pass by the mirrored fountains of the Promenade du Paillon gardens just off Place Massena; each year the Mayor’s office pulls a one-day-only Poisson d’Avril prank… which in past years have ranged from from flying fish, to beached boats, to fishy snow globes!

Back up to main Events in April page